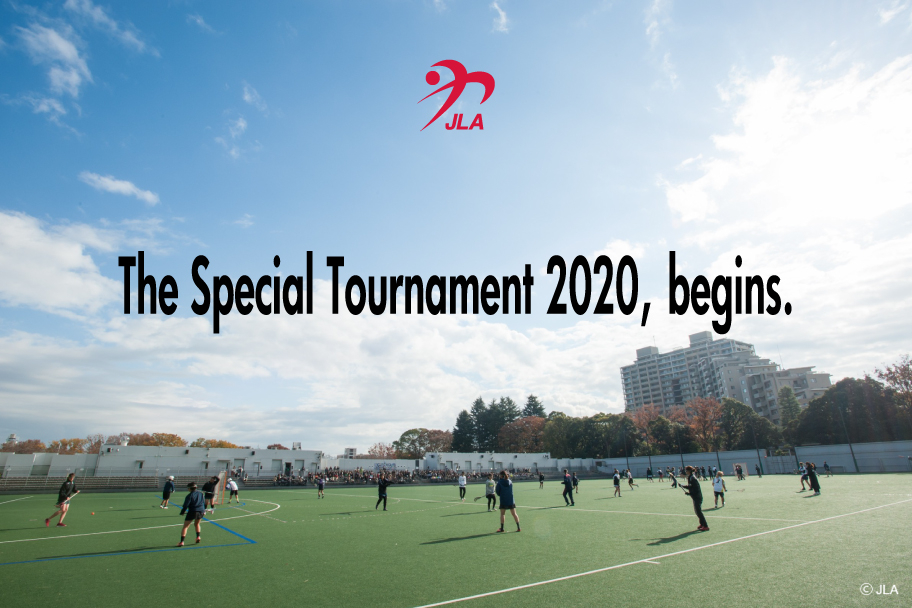 With the start of The Special Tournament 2020

To the lacrosse community,

Two months have passed since the announcement of “Bravely Forward” on June 30th.

The Special Tournament 2020 has began on September 5th, starting from the Hokkaido and Kanto area club-team games. We plan to hold the other areas sequentially as well.

We would like to express our gratitude to everyone who has worked hard for the resumption of JLA activities, and for the fruition of the Special Tournament 2020.

Our appreciation to everyone for being able to play lacrosse this year without disruption.

This unprecedented crisis has us questioning,“Why do we play lacrosse?”

There seems to be countless reasons for us “not to play” lacrosse.

The risk of infection.

Restriction of activities by universities.

Concerns by friends and family.

Reputation from the general public.

Fear and anxiety in everyday life.

We are sincerely proud to be able to overcome these many obstacles, and to lead everyone on their path to find their own reasons to “play lacrosse”, and finally, to hold this lacrosse tournament.

We also mentioned this in the message on June 30th, but in accordance with the tournament, there are three things we would like to mention once again.

This is a measure to avoid slander of infected individuals and infected groups such as the current reporting situation in the media.

(2) We would like to ask for everyone’s understanding in the decline in overall quality of operations which may occur during the Special Tournament 2020, as our number one priority has been to hold the tournament no matter the form.

(3) Stepping on the brake can also be a form of courage.

This year, we decided to hold the Special Tournament 2020 on a best effort basis taking into account, the current situation. Thus, if the situation evolves, we will have to act accordingly.

Cancellation after the decision to hold the event with many people working hard for the realization of the event requires great amount of courage. Along with the courage to move forward, we would like to together value the courage to stop as well.

This is due to some reasons out of the individuals’ and teams’ control. The teams that are currently conducting activities have also faced an risk of the above.

We would like to remember and appreiate that we should not take for granted the fact we are able to play lacrosse at this moment, as the tournament approaches.

Let us move forward with true courage and intelligence instead of foolhardiness.